Katherine Montalto is the “Monkey Wrangler” behind the gruesome label Killmonkies, under which she hosts her “We Are All Monsters” collection.

Montalto came from an Italian American family in Metro Detroit, where she was the oldest of two girls. Montalto admits she was an odd child, who took a liking to horror films and reading books on the occult. She lived a childhood full of mischief, as she rebelled against the idea of being just a wife and mother. Montalto recalls getting in trouble for the content of a magazine that she started in middle school that channeled the 90‘s Riot Grrrl movement.

Now 29-years-old, Montalto prefers living the life of a nomad. She currently lives in Chicago, and plans on spending spring in Detroit, followed by a summer on a friend’s farm in Savana, Illinois.

She is a staff writer for thelocaldish.com and a staff illustrator for Wonka Vision Magazine. In addition, Montalto publishes in many online magazines and designs logos, flyers, and album art for bands. In her free time, Montalto enjoys reading, writing, cooking, and filling her mind with trivia.

As you’ll see from her collection, “We Are All Monsters” Montalto would prefer to challenge tradition, rather than obsess over it. Check out this Q&A to truly understand what goes on inside Katherine Montalto’s head. 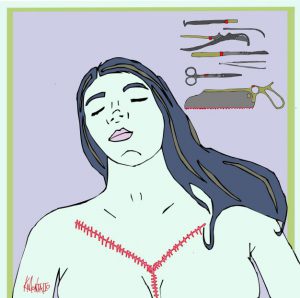 “Jane Doe” by Kill Monkies on Tango Echo
What happened to “Jane Doe”?
“I got the idea for ‘Jane Doe’ from a guest on the The Tyra Show. I was home from work sick one day and forced to watch daytime television. Tyra had a guest on who was a prostitute in Chicago. She said something that kind of haunted me when Trya asked her if she was afraid of being murdered. ‘If I died no one would care, I’m just a Jane Doe.’ It made me think about the way society thinks about these kinds of women, as if they are less than human. Police don’t aggressively investigate their murders which are how many serial killers go undetected for decades. They kill people the rest of society considers throw always, runaways, and prostitutes.” 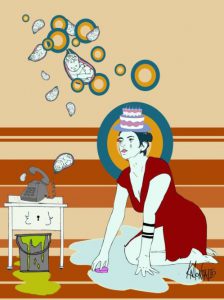 “Spinster” by Kill Monkies on Tango Echo
Judging by the birthday cake on her head, the “Spinster” has a ticking maternal clock, but what is the story behind her?
“This painting always makes me laugh. My grandmother calls me every year on my birthday to remind me that I am another year older, and I still don’t have children. This started when I was 22! If I cured cancer but still had no children my grandmother would think my life was completely unfulfilled. “Yes it’s true no one has to suffer with cancer, but she must be so sad with no children.’” 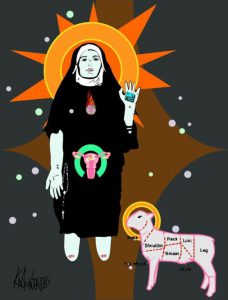 “Saint Anthony” is the Catholic Saint of all lost things. Is the nun in this piece praying for fertility?
What do you hope viewers will take from this?
“I was wandering around the main branch of the Chicago Public Library one day, and I found this tiny book alone on the shelf. It was full of patron saints and what their patronage was. In this book it said that Saint Anthony was the patron saint of amputees and barren women. I thought that was interesting, suggesting that being barren was somehow the same as missing an appendage.”

“My parents are not religious. We never went to church so religion has always been a mystery to me. I’m an atheist myself. I find it kind of scary how religion goes to great lengths to repress women’s sexual freedom through fertility. You’ll notice that in ‘Saint Anthony’ instead of a burning heart in her chest the nun has a birth control pack and in her hand is a condom with a crown of thorns. Just as in ‘Soiled’, the girl is praying to a uterus with a lock in it, meaning keep your dirty paws off my uterus!”

Do you consider yourself a feminist?
“Yeah I’d say I’m a feminist in that I not only want equal rights for girls and women but more importantly equal respect. I think that’s what I have the hardest time with. Yeah we can go to work and wear pants and choose not to have children, but women are still treated as objects a lot of the time. If women do achieve something great it still has to be explained. Like, ‘She managed to graduate from MIT, and design awesome A.I. robots. How did this girl do it?’” 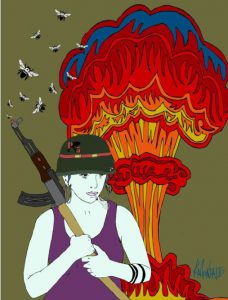 Is the primate in “Illusion of Innocence” related to the one seen in “Project Five”? Is the primate used as symbolism or a trademark?
“I’m a big nerd for the movie ‘Lawnmower Man’. The chimp that escapes from the research facility with a gun and helmet at the beginning of the movie inspired ‘project five’. This theme comes up a lot in my work. It’s why my artwork is done under the name killmonkies. Killmonkies meaning monkies that kill; a group of revolutionary monkey soldiers on an artistic rampage. My slogan ‘join the revolution’ is all nerdy sci-fi stuff for shits and giggles.” 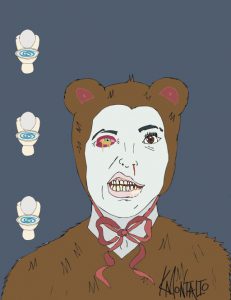 What is your favorite piece from the collection “We Are All Monsters”?
“I tend to like the funnier ones the most like ‘Nightmare’ and ‘Those Who Oppose Us.’ Nightmare is inspired by a reoccurring dream I used to have as a kid. I would find myself in a crowded mall dressed in a teddy bear costume. I would have to go to the bathroom really bad, but the costume would never have a zipper. It was terrifying then but seems so funny now. ‘Those Who Oppose Us’ is just a fun way to pay homage to my favorite genre of horror, the zombie apocalypse. I also think the idea of corrupting children with pop culture is funny, hence the title.”

Montalto has shown parts of this series at various group shows in Chicago, Detroit, and San Francisco. Her work was recently featured at the 10.5 Annual Dirty Show in Detroit.