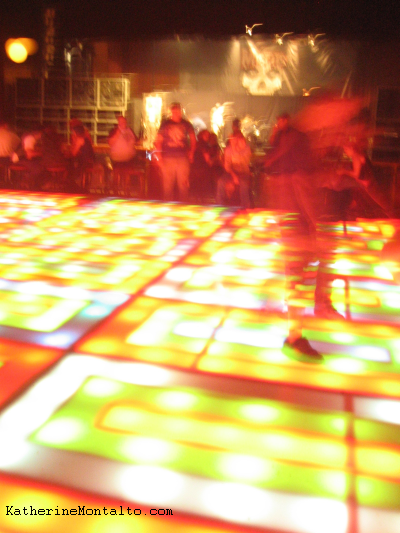 For the last ten days I have been searching for the last of the disco era illuminated dance floors. They turned out to be more illusive than I first imagined. I started with a basic surf around the internet. The first few hits will surely be every bar left with a disco floor including pictures of cool kids in their tight Qiana shirts unbuttoned to their navel and flowing Halston dresses draped over braless breasts. Instead I was inundated with posts about amazing energy efficient LED floors powered by the electricity generated from those who are dancing on it, programmed to follow the beat of the music played by a DJ who collected classic disco hits from pirated MP3s. I was looking for floors installed in the 70s, lit with energy hogging incandescent bulbs controlled by coke addled DJs spinning real vinyl records. I guess some things can’t be found with a simple google search. I have actually danced on such a floor. I went to my share of metal shows in the late 90s at the Detroit icon, Harpo’s Concert Theatre, where taking up most of the middle section of the theatre is an illuminated dance floor.

Surely there have to be more than just Harpo’s left even if the owner claims to be the last. I posted a few bulletins on myspace and craigslist asking if anyone knew of any other survivors. Four places across the country were mentioned repeatedly; Harpo’s of course, The Key Club in Hollywood California, Stardust Bowling Alley in Addison Illinois just outside Chicago, and the most mentioned, the Dolphin Tavern in south Philadelphia. Most of the owners were confused as to why anyone would care about their crappy old disco floor. “Only three of the lights still work,” scoffed the owner of the Dolphin, “I don’t even turn it on anymore.”

The Key Club used to be known as Gazzarri’s, a notorious piece of rock history where bands like The Doors and Van Halen were featured as the house band before making it big. Aside from being the birthplace of countless famous rock bands it was also a dance club, which is probably why the light up floor was put in. A disco club though, it was not. Rock being the mortal enemy of disco, the floor was used for more machismo activities, like the go-go dancing of attractive, young girls in between live band performances. Carrie, at the Key Club, informed me that the illuminated floor went out with Gazarri’s, which was demolished in 1995. The Key Club was built in 1996 over its ashes.

The Stardust Bowling Alley had its illuminated disco floor until just a few years ago when it was remodeled. The manager remembered fondly the bar in the bowling alley being very popular during the late 70s, “We were one of the first disco clubs in the city.” Disco acts like Gloria Gaynor would come to sign albums. The illuminated dance floor was installed one week after the 1977 release of ‘Saturday Night Fever’. Plans for the floor were underway before the movie. The Stardust just had incredible luck with the date of the floor’s unveiling. “There was a line a block long,” remembers the manager.

The owner of the Dolphin Tavern, who patrons affectionately refer to as “mom”, made it very clear that it was just a bar and NOT a disco club. She wasn’t interested in telling me much more about the history of the floor and was confused as to why I even cared. Those who responded to my online bulletins, mostly those in bands who had performed there, did so with wild stories about strippers past their prime who danced on the now dark floor to whatever songs happened to be playing on the juke box and that they wear black electrical tape over their nipples instead of pasties. How punk rock! The girls dance in between the sets of live acts. “The dancers don’t come on until nine. Learned that the hard way,” one reviewer confessed on Yelp.com. I think I might need to make a pilgrimage to South Philly to check out this Dolphin Tavern. The owner of Harpo’s claim of having the last working disco floor was appearing to be true.

Harpo’s has been around since the golden age of cinema. In the 1930’s and 40’s it was a movie house called the Harper Theatre and was owned by the Westman chain. The current owner, Ernie, knew a lot about the building’s history. His father bought it in 1974 and it became a disco club with an illuminated dance floor three years before the release of ‘Saturday Night Fever’. Back then the cover was $5 and that included 2 free drinks. The club did well before the movie but became a huge success after its release. Disco was over at Harpo’s almost immediately after the infamous Disco Demolition rally in Chicago’s Comiskey Park Stadium in July 1979. The theatre was sold to a couple of rock promoters and closed its doors for two weeks before triumphantly reopening with a Mitch Ryder concert! Ernie took over in 1988 and Harpo’s began featuring metal bands. He remembers a lot of cool bands playing Harpo’s like, White Zombie, U2, Run DMC, and my favorite Metallica opening for Danzig. The Theatre was most recently featured in the HBO series Hung, which is set in Metro Detroit.

I paid Harpo’s a visit recently to get some pictures of the floor and to check out a Misfits show. Not much had changed since I had last been in 1999 to see Kittie in concert. I had forgotten what a massive place it was. Past the entrance is the main hall where the merch booth sits behind the old concession stand leftover from the movie house days. There are three levels inside the theatre. The first level has a bar serving cheaply priced well drinks and beer. There are a few tables and bar stools scattered about. They’ve added two stages to this level since I was here last, each protected by a tall metal railing. At least ten bands are always scheduled to go on before the headliners giving these small acts an unusually large audience. The second level is a few steps down from the first. There is a small bar on either side of the disco floor. It isn’t lit up and I have to ask to have it turned on. I remember it being aglow every time I was there in the 90s. It was weird to see somber metal kids gathered on a disco floor. Ernie tells me that underneath the thirty two 8ftx4ft panels are five miles of electrical cords and that he is the only one who knows how to fix it should something go wrong. This is probably why it isn’t turned on as much. He says he only leaves it turned on when they have a dance night, which isn’t often anymore. He shows me the complicated control panel and I ask him if he has any plans of removing the floor, “Not really, unless someone wants to buy it.” At the far end of the second level is a tall metal railing over looking the third level. Between the second level and the stage towering eight feet above the floor, the third level’s mosh pit is just that, a pit. There are signs posted warning to enter the pit at your own risk. Ernie tells me that moshing got its start at Harpo’s. I don’t know if that’s true but I can’t imagine a better origin story.

Harpo’s is no joke. People here take their metal seriously. I saw more than one kid sporting a sixinch Mohawk without a hint of irony. No fucking hipster fauxhawks here. By the time the Misfits went on stage the pit was packed and when the guitars began to wail the crowd erupted in violence. I safely watched from the second level disco floor as men the size of tractors plowed through the crowd with wind milled fists.

I was sure I would find more than one working illuminated disco floor. Why? Disco ended almost 30 years ago, its heyday barely lasted a decade. From the opening of Studio 54 and the release of ‘Saturday Night Fever’ in 1977 to the Disco Demolition rally in Chicago’s Comiskey Park Stadium in 1979, disco was over in a flash. Only four floors made it past the 1980s. Of those floors only one is still working to full capacity, the last of a dead era found in Detroit; where things decay but never die.