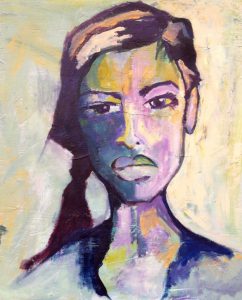 Out With the New, In With the Old

A chronicle of Tony Roko’s art career should perhaps begin with the words, “once upon a time” because of the unlikely way it started. At the age of 19, Roko went to work on the assembly line for Ford Motor Company. As a kid, he was always painting and drawing, a habit he took with him to the line. On his breaks, he would sketch in his notebook, sometimes making portraits of his co-workers. The union reps and management took notice, pulled him aside, and asked if he’d like to be part of a plant beautification project to boost the workers’ morale. Roko was put to task painting portraits and murals on plant walls based on suggestions from the workers. An auto plant is a hot and gritty place, not exactly ideal conditions for a mural, unlikely to stand up to the wear of the environment. To combat this, Roko used materials he found around the factory that had already shown their resistance to such conditions; auto body paint, spray paints and scrap wood from pallets. He became the resident artist for Ford and began beautifying other plants in the Detroit area.

Roko still works for Ford at Wayne Stamping & Assembly painting safety icons around the plant, an activity that gives him time to create his own artwork. He still employs many of the techniques he learned during his years painting in factories, such as working with salvaged paints and woods while adding floor stain, acrylics, linseed oil, varnish, leftover house paint and old windows to the list of media he works with. He paint portraits of interesting characters using bright, vivid colors.

Recently Roko began working with another artist — one who goes by the name “Bowen,” aka Bowen Kline — creating pieces together by painting at the same time on the same canvas. Roko bought a Kline painting for his wife from Dell Pryor Gallery in Detroit. He knew little about Kline and couldn’t seem to find any information about him. A friend did some research, found Kline and put the two artists in touch. Kline visited Roko’s studio and they decided to set up two easels and paint at the same time. Soon in the session, Kline walked over to Roko with his brush and began painting on his canvas. At first the experience was uncomfortable for Roko, “It’s like someone coming over and groping your wife.” It quickly became apparent that Bowen was onto something, they finished the painting together in 10-minute turns; by the second piece, they just painted at the same time, though Bowen usually gets in the first stroke. Most of their portraits start from an inspiration photo, which the pair uses to get the basic shape of the subject started, but once the painting begins, the inspiration photo is discarded and the two work from their imaginations. The characteristics of both artists are clearly visible but come together in each piece to create a completely new style.

See Roko’s work along with his collaborative pieces with Kline at the Janice Charach Gallery for the show Out With the New, In With the Old opening at 7-10 p.m. Aug. 22.

Click here to see a slideshow of solo artwork by Tony Roko and his collabartive work with Bowen Kline.