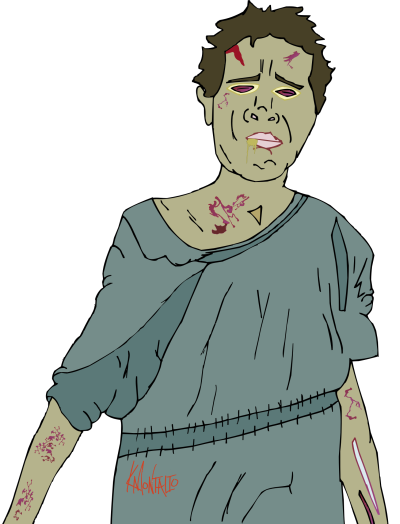 Since I can remember, I have had an obsession with zombies.

Maybe it has something to do with the Michael Jackson “Thriller” video airing just days before my third birthday.
Maybe it comes from growing up in Detroit, where zombies roam the streets freely.

Wherever this obsession comes from, the past ten years in pop culture have been a wonderland of undead delight. Not only do I love a good zombie flick, but it is interesting to examine their influence on all mediums.

Though they have come to branch their pasty corpse arms into most forms of entertainment, it all started in the movies. Although Night of the Living Dead was certainly not the first horror movie about zombies, it was probably the most influential in creating the incredibly popular zombie apocalypse sub-genre. The film is based on a short story by George A. Romero, who admits the idea was not his own: “I basically had ripped off from a Richard Matheson novel called ‘I Am Legend.’” Romero went on to make Dawn of the Dead, Day of the Dead, Land of the Dead, and Diary of the Dead, and is now working on a novel about the origin of the zombie realm. The book is due out July of next year.

Even before the 1968 release of Night of the Living Dead, there were plenty of zombie movies being produced. The first to feature a non-vampire or mummy walking undead was J’accuse, a 1919 French antiwar film, in which all those slain in World War I arise from their graves and return home to ask their loved ones why they had to die for war.

The 1930s and ‘40s produced a slew of zombie movies including one of the most famous, White Zombie, staring Bela Lugosi. This was the first horror film to show zombies as mindless, walking corpses (and is where the band White Zombie got its name). The 1943 film, I Walked with a Zombie, like White Zombie, is about voodoo-style zombies. The 1936 film Things to Come is about a viral plague called “the wandering sickness” that causes the infected to wander slowly and incessantly, very much like zombies, infecting others on contact.

The first zombie movies were about xenophobia, like in White Zombie and I Walked with a Zombie, reflecting white fear of restless natives. Subsequent films channeled fear of war and radiation, as with Night of the Living Dead, in which anyone who died came back from the dead whether they were bitten or not.

With the new millennium came new problems and new fears, like getting a package of anthrax in the mail or a pandemic flu sweeping the globe. Resident Evil, a video game about zombies created from bio hazardous waste, was released in 1996 for the Play Station and Sega Saturn gaming consoles to critical and commercial success.

Not long thereafter, in 2002, both 28 Days Later and the Resident Evil movie were released. 28 Days Later, was a critical and commercial success, tapping into fears we have as a society about bio weapons and an unchecked military.

Every couple of years after that, a zombie film has come out to much critical success: the Dawn of the Dead remake (2004), Shaun of the Dead (2004), Land of the Dead, released in the summer of 2005, Slither (2006), Planet Terror (2007), and this fall had Zombieland, which was number one in ticket sales its opening weekend.

Zombies, it seems, are everywhere in popular culture, rivaling their sexy undead counter parts, vampires. For me, the appeal of a good zombie movie or book is the post- apocalyptic breakdown of society.

What are we really at our core? It seems we’re all hanging on the delicate balance of modern society that could topple over from the mere weight of our consumption and expanding girth. Post apocalyptic zombie films are the perfect vehicle for discussing our own social monsters; racism, consumerism, hatred, and fear. When the guiding forces of modern society are no longer there to keep us in check are we good enough, at our core, to stay civilized? It took the world 600 years of degenerate, inhuman behavior to recover from the fall of the Roman Empire.

But where does this zombie myth come from?

Zora Neale Hurston, of Their Eyes Were Watching God fame, first brought Voodoo and zombies to American pop culture with her book Tell My Horse (published in 1938) about the research she did on folklore of the Caribbean. In chapter 13 titled “Zombies,” she recounts the tale of Felicia Felix-Mentor, a woman supposedly buried in 1907 who was found wondering the road some 30 years later.

Hurston describes the woman as having a “blank face with dead eyes,” with eyelids white around the rims as if burned with acid and “nothing you could say to her or get from her except by looking at her, and the sight of this wreckage was too much to endure for long.”

Wade Davis also famously wrote about Clairvius Narcisse, a man who, like Felicia Felix-Mentor, was buried only to be found years later wandering in the road near his home. Davis, a Harvard ethnobotanist, traveled to Haiti in 1982 to research a pharmacological case for zombies in two books, The Serpent and the Rainbow (1985) and Passage of Darkness: The Ethnobiology of the Haitian Zombie (1988).

What both Davis and Hurston found was that zombies weren’t people brought back from the dead, but rather a person who was drugged with a strong poison called tetrodotoxin that caused a person to appear dead. The heart slows to an inaudible crawl and breathing is almost brought to a halt, so that the breath does not even fog a mirror.

Bodies are rarely, if ever, embalmed in Haiti. A person is usually buried a few days after death, making it easy for someone to dig it up 36 hours after it has been entombed, which is about how long it would otherwise take to suffocate in a grave.

Some people in Haiti are so afraid of becoming a zombie that they go to great lengths to keep it from happening. Family members of the deceased will camp out in the graveyard for two days after their loved ones are buried, and they may cut open the body or inject the heart with poison to ensure that their loved one truly is dead. Sometimes a knife is put in the corpse’s hand and the arm flexed in a way that the body will automatically stab who ever opens the grave.

The Making of a Zombie:

In Haiti, a bokor is a voodoo priest with the power to create zombies (among other things).

The legend goes that a bokor blows a white powder into the victim’s face or rubs it onto an open wound and then steals his soul by sucking it through cracks in his front door and placing it into a jar. The victim then falls ill and shortly thereafter appears dead. The bokor then brings the jarred soul to the graveyard and digs up the victim. He holds the victim’s soul under his nose to wake him up.

Sometimes, this requires the bokor to beat him in the head to wake him up. Lack of oxygen from being buried alive and blunt force trauma from the beating are two keys reasons Haitian zombies appear mindless and undead. The bokor closes the tomb to ensure that the grave looks undisturbed and no one will look for their undead relatives.

The victim has to be walked past his house to erase the memory of his home and family so that he will not run away and return. The bokor hides the victim using a crowd of minions to keep him from being detected.

The victim is taken to a temple called a hounfort and given a secret liquid to drink which turns him into a zombie who will work tirelessly without consciousness of his surroundings or conditions and have no memory of who he once was: the perfect slave.

Legend has it that people are resurrected from their graves and dragged from the crypt so that they will toil ceaselessly in the fields of banana and sugar plantations. They work like beasts, unknown to their families who believe they are dead and resting peacefully in their graves. This is a real fear for many Haitians from the very poor to the very wealthy. Sometimes zombies are created to become thieves for their bokor. Children are mostly used for this purpose. They steal goods from the market in the dark hours of the morning.

In Haitian culture, a person cannot sell their own soul. The practice of sacrificing souls is called “Ba Moun,” in which a person sacrifices the souls of his loved ones. Only close family and friends can be used, and when there are no more suitable souls left, he must then sacrifice his own soul.

A person can gain wealth and power through a Ba Moun, but the debt has to be paid every year with the sacrifice of a new soul. Some men will sacrifice their whole families, even all their children, until no one is left and he too becomes a zombie.

Zombies in the News:

A recent University of Ottawa and Carleton University study posed a question: If there was to be a battle between zombies and the living, who would win?

The study concluded that an attack by zombies would lead to the collapse of civilization unless dealt with quickly and aggressively. In most respects, a zombie “plague” resembles a lethal, rapidly spreading infection. The researchers conducted the exercise to help scientists model the spread of unfamiliar diseases through human populations.

Zombies are a permanent fixture of pop culture showing up in movies, music, and books. There are even zombie events across the country such as zombie pub crawls and zombie runs where people come to a park dressed as either zombies or victims and they chase each other around. Whether we fear becoming a zombie slave toiling away on a plantation or being overrun by a zombie apocalypse, people can’t seem to get enough of the thrill these fears provide.