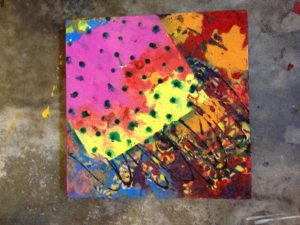 The main focus of artist Gilda Snowden is documentation, collecting not just her own history, but the history of Detroit and its art community in her work. She says, “If you don’t document, you lose history.” Snowden takes advantage of such social media sites as Facebook and Tumblr and video sites such as YouTube to document her work and its process — as well the work and processes of other artists in Detroit.

Until college, art was never the focus of Snowden’s life. As a child, she liked making art and crafts, but no more than any other child. She is a graduate of Cass Tech High school where she majored not in art but fashion design. Snowden started at Wayne State University in 1972 as a sociology major. She found that she gravitated toward art classes as electives, so much so that after four years she completely changed gears to major in art. She earned her BFA in Advertising Design and Painting, MA in Painting, and MFA in Painting from Wayne State University by 1979, and started teaching for the university that same year. By 1985, she was a professor for the what is now the College for Creative Studies, where she currently teaches.

The series she is currently working on responds to Detroit’s ongoing urban gardening phenomenon. “Urban gardens unite people, when cities seem to be designed to separate people,” she says. She works on multiple paintings at once, adding layer after layer of acrylic and spray paint, always on the floor, she never works with an easel. “I want them to be layered, gritty, grungy, beautiful.”

She says that she chose to paint because she loves the immediacy of it. “I want to see answers immediately.” At the start of her career at Wayne State University, Snowden was creating still lifes and figurative work, but by the time she was a graduate student, her work had become more abstract, “I had to leave still life because it was still,” she says. Instead, kinetic forces of nature, such as storms and tornados, began to influence her work. Even her portraits became more abstract; she created hundreds of self-portraits that went from detailed figures to silhouettes. The DIA has two in its collection.

Though Snowden’s style has changed over her career, from the subjects of her paintings to the materials and media that she uses, the voice of her work is always clearly Gilda. “I reserve the right to work however I want to work from one day to the next.”