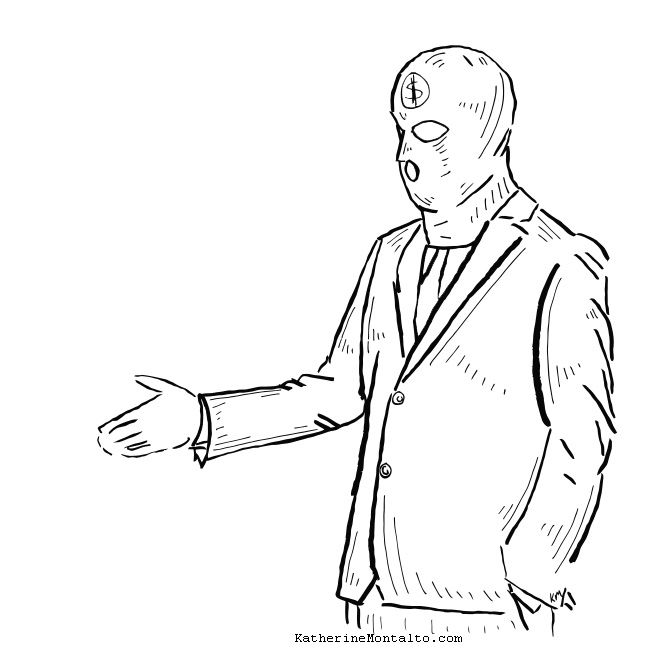 Originally Published in the Detroit Socialist.

He was smoking a cigarette in the alley when he noticed her walking alone along the empty streets. She moved on autopilot, lost in her own world. She didn’t notice him following behind her. It wasn’t until he was right at her heels that her head perked up. He stepped in front of her. He was wearing a ski mask. She couldn’t hear what he was saying over the music in her headphones.

“Give me all your money!” he spat through his ski mask.

She looked at him confused. “Excuse me?” she pulled the buds from her ears

“Give me all your money bitch!” he said again, louder this time.

“Well wasn’t this the perfect end to a dreadful day?” she thought to herself. “Some guy is trying to rob me of money I don’t even have.”

His rush of adrenaline dipped a little by her lack of fear.

“Give me all your money bitch!”

She thought a moment. “I don’t have any.”

He yelled again. “Bitch! Give me all your money!”

“I don’t have any!” She yelled back annoyed.

He shoved her. She stumbled back a few steps but didn’t lose her footing. She shoved him right back. They locked in a stare. Her body puffed up in size, like one of those fish trying to scare off a predator causing him to deflate a bit. She could see him losing his nerve. He knew he was defeated.

“Get out of here.” He waved her away.

She turned and walked off without looking back. She laughed a little to herself. With confidence at first, but the more she replayed the event in her head the more her confidence faded. Her stomach dropped, and she started to cry. She tried to focus on the positive. She had a job interview the next day. Not for another temp agency either but a permanent position with benefits at an investment firm in a fancy building downtown.

“I could have been killed!” She thought. “What was I thinking? I should have just thrown him my useless wallet.”

He watched her walk away. He pulled off his ski mask once she was out of sight and lit another cigarette. No one had ever challenged him like that before. Most people just throw their wallets as soon as they see the ski mask. He tossed the butt in a puddle and walked back to his condo. A nice one bedroom on the 27th floor of a high-rise overlooking the lake. He walked out onto the balcony and thought about what started this little hobby of his.

Every day it was the same. Get up. Put on a nice suit. Take the train downtown packed with all the other working stiffs. Sit in a windowless office all day and move around numbers. Then it’s back on the train. Back to his empty one-bedroom condo. Dinner for one. Wake up the next morning and do it all over again. He almost completely cracked there for a while, had a complete mental breakdown. One night on a crowded train, he stole a women’s shopping bag. She had so many with her that she didn’t even notice when she got off at her stop. There was nothing of value in the bag but the rush lifted his spirits for a week. He started picking pockets, then going out at night to mug people. It was the biggest rush of all. The power it gave him. He became obsessed with it, like a fiend. He needed it.

She arrived home, went to her room, and fell face-first into bed. It seemed like only minutes had passed but the screaming alarm clock confirmed that she had slept through the night and was now running late for her job interview. She rushed around the room, throwing clothes every which way, trying to put together a respectable outfit from her thrift store fare.

He sulked into work the next morning empty without his violence buzz. Before he could even get settled, the receptionist poked her head into his office.

“Beth Marvis is here for her interview.”

“Oh shit, I forgot about that.” He ran his fingers through his hair. “Send her in.”

The receptionist closed the door, and a few moments later Beth came in. His stomach dropped. It was the brave girl from the night before.

He greeted her with a firm handshake and a smile.

“Nice to meet you, Beth.” He shook her hand waiting for her to recognize him. Nothing.

“Have a seat.” He motioned to a chair opposite his desk. He sat down in his chair, relieved.

“So Beth, I’ve been looking over your resume. It’s quite impressive.”

He continued with the interview discussing the inner-workings of the company.

“ — Which basically means we move money from one account to another.”

A dark cloud passed over her eyes. She looked him over. “What did you just say?”

His stomach sank. Beads of sweat formed on his brow. She recognized him.

The Detroit Socialist is produced and run by members of Detroit DSA’s Newspaper Collective. Interested in becoming a member of Detroit DSA? Go to dsausa.org/join to become a member. Send a copy of the dues receipt to: membership@metrodetroitdsa.com in order to get plugged in to our activities!