Originally published by The Local Dish.

Pam Turkin, owner of  Detroit’s Just Baked, began with a cupcake obsession. Her background is not in baking but marketing, so she was quick to notice the growing gourmet cupcake trend and set out to capitalize on it. She started testing recipes at home, feeding her family a steady diet of cupcakes for a year before going into business.

The obsession seems to be universal. Rebecca, a cupcake slinger at the Royal Oak shop, was working at Twelve Oaks Mall when she caught the bug, eating 12 cupcakes in two days. The best way to feed her addiction, she concluded, was to work at Just Baked.Just Baked began serving jumbo gourmet cupcakes in January 2009, in a modest little brick building with a store front and bakery in Livonia, MI. One little store mushroomed into three more (in Novi, Ann Arbor and Royal Oak) in short order.

So, how are the cupcakes? Well, let’s just say if you’re in the Metro Detroit area, don’t walk, RUN to the closest Just Baked location and try one of these fantastic treats for yourself. Every cupcake is made fresh every day. You won’t need a glass of milk to wash them down; each cake is super moist, and the buttercream frosting is rich and creamy and not bogged down with excess sugar. They come in 50 fabulous flavors inspired by the most delicious childhood memories like Drumstick, cinnamon donut, and the amazing, decadent Fat Elvis, a banana cake topped with peanut butter buttercream frosting dipped in chocolate ganache. 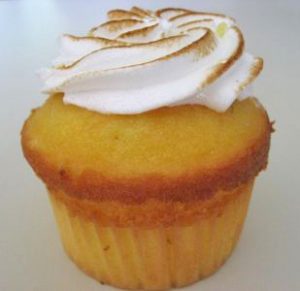 Just Baked has expanded into making full-size cakes for weddings and other special cake-requiring occasions. The bakery is even providing cupcakes for the newest leg of The Johnny Cupcakes Suitcase Tour. Just Baked employs a group of fun, creative kids in their 20s, many of whom have an art school background, who are equally obsessed with creating innovative cupcake recipes. Nicole, formerly of Bleeding Heart Bakery in Chicago, is creating their vegan line. These vegan cupcakes are so good you’d never know they’re dairy free unless someone told you.