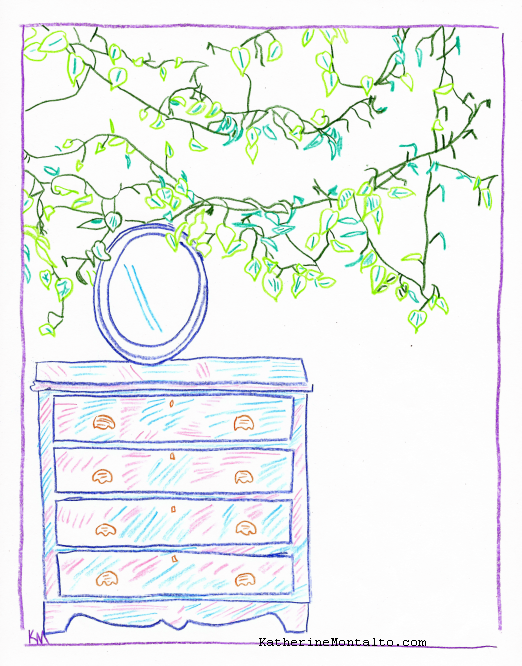 Kara’s boyfriend had kicked her out. Put all her stuff out on the lawn of the courtyard building they lived in. It was waiting for her in a sad pile when she got home from work. Luckily, she didn’t own much and it all fit into her car. Kara didn’t have enough money for a down payment for a decent apartment so she took what she could get. She worked in a call center in a grey building in a grey office park. The kind of place that expected its staff to wear nice clothing but didn’t pay enough for them to afford it.

It’s just until I can get back on my feet, Kara told herself.

The place she found looked more like a motel than an apartment complex. It was right at the mouth of the freeway. A long single-story building with doors and windows that faced out to the parking lot, a spot in front of every door. The apartment was dark inside. A small amount of light came from a single window in the living room with a view of the parking lot. The only other window was in the bedroom and it overlooked the busy freeway.

There was a thin, sticky layer of grime covering every surface of the apartment. No matter how hard Kara scrubbed though, she couldn’t seem to get through it. She gave up. She dragged her mattress in and fell asleep the moment she hit its lumpy surface.

Over the next few weeks, Kara scoured thrift shops and garage sales for cheap furniture to fill her tiny apartment. Everything had to be small enough to fit in the back of her car. Her mattress was still on the floor but now she had a nightstand and a few lamps in her bedroom.

The complex was very quiet. Kara thought the other apartments might be empty. Though, there was light and movement behind heavy drapes that covered the front windows.

The only neighbor Kara ever saw was an old woman who lived a few doors down from her. She had many large potted plants in front of her apartment that she was always attending to. Kara would wave and say hi, the old woman would wave but never said anything back. One time Kara walked over to introduce herself.

The woman shook it with a quick firm grip. She made a few gargled sounds and pointed to her throat but couldn’t get out the words and threw her hands up in defeat.

“Well, it was nice to meet you. I’m down in seven. Knock if you need anything.”

Kara walked away and the woman went back to tending her plants.

Until moving into the building, Kara had never had any trouble with allergies but now it had become unbearable. Her eyes watered, her sinuses were inflamed, and her throat was scratchy and raw. She felt sluggish. Her body ached. People at work commented on how tired she looked.

The light spring weather turned into a heavy summer. The vegetation on the freeway slopes grew thick and dark green. It moved closer to the apartment complex every day, growing in thickness as it went. The grass and bushes around the complex also grew dark green and became fuller.

One night a strange noise woke Kara from an already troubled sleep. There was a thrashing sound coming from the bushes just outside her front door. She turned on her outside light and went out to investigate. The bush closest to the door shook violently. She heard the labored chirping of a small bird. She crouched down to find the bird tangled in the tendrils of the bush. After trying unsuccessfully to get it free with her bare hands she went back inside to get her strongest scissors. Holding the bird in one hand she cut away at the tendrils wrapped tightly around its delicate legs. The vine had grown around it. Kara was surprised by how delicate the bird felt in her hands. She gently set it down on the sidewalk, fearful she would crush it. The small bird stood dazed a moment before tearing at the plant matter still clinging to its legs. Once free it flew off.

The next morning, Kara noticed just how much the bushes in front of her apartment were overgrown. They had begun to cover her windows. Kara never saw any maintenance crews taking care of the property. There was a shed at the far corner of the parking lot. She found it to be unlocked. Inside, it was stacked with gardening equipment; lawnmower, hoses, rakes, shovels, weed killer, all of which were covered in dust and cobwebs. She took a pair of gardening shears and spent a whole afternoon trimming the bushes under her window. When she stepped back to review her work, She let out a heavy sigh of disbelief. The bushes looked as full as when she had started. The cut branches lay all around them on the ground and yet they were still the same size and shape as when she started. Kara tossed the shears on the ground, defeated. Hot and exhausted, she went inside and went straight to bed. She woke up the next morning shocked that she had slept all day and through the night.

Every day the vegetation around the apartment building grew thicker. Kara had given up trying to trim it around the outside of her apartment but brought the garden shears inside. Vines and branches had started to make their way through tiny cracks she hadn’t noticed before. She sprayed them with the weed killer she had found in the shed. The leaves wilted and turned brown. She would come home from work to find the vines bigger and stronger than they were before she had sprayed them. They had gotten so big that she had started to cut them with the garden shears. That was as effective as it had been with the bushes outside. The kitchen was now completely taken over by large winding green branches. Kara wasn’t hungry anymore anyway. Large orange flower buds sprouted as the branches climbed their way to the bedroom. Kara was so tired. She was missing a lot of work. When she did go in, she got very little done and missed her quotas. Her boss scolded her several times for not adhering to the office dress code.

Early one morning, the buds burst open into large flowers. Pollen rained down on Kara like orange snow. It covered her face, clogging her nose and throat. She breathed deep and the pollen buried itself into her lungs. Her eyelids grew heavy and she fell back asleep.

Kara awoke a few hours later. Her throat hurt and her body ached. A thin layer of grime-covered her skin. She took a hot shower but no matter how hard she scrubbed she couldn’t remove the grime.

Kara dressed and went to work. She filed into the 10 o’clock staff meeting with the rest of the drones and sat down at the far end of the conference table hoping not to be noticed. All her efforts failed. Her boss asked her a question. Kara couldn’t understand her, her voice sounded like it was underwater. She tried to speak but only a few garbled sounds escaped her mouth. Kara clutched her throat. It felt like something was growing inside it.

Everyone in the room was staring at Kara.

“Are you alright?” were the only words Kara could make out.

She felt panicked. Kara ran out of the room, grabbed her stuff from her desk, got in her car, and drove home. The growth in her throat felt like it was moving. Her hearing became more muffled.

Kara parked her car in front of her apartment and sat with her head down, stunned for a minute.

“It’s ok. You’re home now.” Kara heard someone say close to her, so close it sounded like it was coming from inside her head.

She looked up. Her neighbor, tending her plants a few doors down, waved at Kara.

It was the neighbor’s voice inside her head.

Kara tried to speak but her throat no longer worked.

“You can’t speak that way anymore, you won’t need to. Listen.”

The vegetation on the freeway slopes, thick and dark green, whispered to her in trillions of tiny voices.