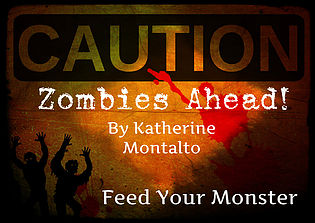 Published by Feed Your Monster.

Michelle, in the passenger seat, swiped through her phone. “They’re starting construction on the I-94 expansion,”

“On a Friday night?”

“Would you rather they work on it during morning rush hour?” Jake said from the back seat not looking up from his own construction work— rolling a joint on a textbook.

“Hey, come on. Don’t roll that in here. Can’t you wait until we get there?” Eric said after spying Jake’s project in the rear view mirror.

“Shit!” Jake slapped the back of Michelle’s seat. “Someone hacked into the sign. That’s so funny!”

“How is that funny? What if terrorists or something hacked into that system?” Eric looked at Jake through the rearview.

Michelle laughed. “What are the terrorist going to do? Direct traffic? How dare they be so helpful.”

Jake handed Michelle the joint. She lit it, took a few drags, and handed the joint to Eric. “It’s just a harmless prank, jeez.”

Eric took the joint without taking his eyes off the road even though traffic had come to a complete stop. “Yeah I know,” he said taking a drag, “but it’s not cool to have so little security on something so important.”

“That’s the city’s problem, not the pranksters,” said Michelle.

“Those pranksters are blocking important information with their joke.” Eric exhaled. He passed the joint back to Jake.

“What important information?” asked Michelle. “Expect delays.” She pointed to the line of traffic barrels in the left lane. “I think that’s obvious.”

“I think it’s funny as hell man,” Jake said with a short breath, holding smoke in his lungs.

“What if something dangerous happens and the signal is jammed with this stupid joke?” Eric pointed at the sign.

“Hey! What’s going on up there?” Michelle leaned forward in her seat. “What is that? Are those people fighting?” Her finger pressed against the windshield, pointing into traffic.

“Are they fighting?” Eric turned. In a car up ahead, a man bludgeoned his way through the window with nothing but the flesh of his hands and face.

“Is that blood all over his shirt?” Michelle whispered.

The man thrashed inside the car tearing at the woman in the driver’s seat. She screamed.

“Should we help her?” Jake asked in a panic.

“No. That man looks dangerous. Just stay in the car.” Eric pushed his hand down motioning to stay.

“We gotta do something!” Jake protested.

“I’m calling 911.” Michelle dialled. “It’s busy.” She held up her phone. The busy signal pulsed from the speaker.

“How could it be busy?” Eric took out his phone and dialled. Busy.

“We’ve got to help them!” Jake pushed open his door and got out, closing it behind him. He took a few nervous steps. In the windows of the nearby cars, he saw scared faces staring back at him. Cell phones out, cameras filming the attack. The bloody man pulled the woman through the broken window. The remaining glass sprinkled on the ground. The bloody man bent down and tore at her flesh.

“What’s that noise?” Michelle cocked her head to the side.

Running towards them was a wave of people. Those in the front were screaming in terror. A few tripped, causing an avalanche of bodies to tumble down on top of each other. A swarm of people from the back pounced on the fallen. Ripping into their skin, shoving handfuls of flesh and guts into their mouths.

“Where’s Jake?” Michelle broke free from Eric’s grip. She looked out the window to see him running up the steep slopes of the freeway valley. “Should we follow him?”

They watched as a rogue swarm ran up the slope, pulling Jake down and tearing him apart in mere seconds.

“What should we do?” Eric’s voiced cracked.

The wave of people swelled and was now mostly flesh-hungry zombies.

“Should we run?” Michelle cried, tears streaming down her cheeks.

“Run? Where? They’re everywhere!” Eric pointed to the mob growing closer, smashing into cars as they advanced.

“What are we supposed to do? Just wait here to die?” Michelle sobbed. “Fuck it— I’m making a run for it!” She popped open the door.

Eric reached for her but she was out of the car before he could grab her. He watched as she snuck from behind one car to the next. She crept up the slope of the freeway opposite of Jake’s attack. She made it to the top. Cautiously, she stood up from her crouching position. Eric sucked in a breath and held it as he watched her peer over the railing. A mass of grabbing hands reached out and pulled her over. Eric let out his breath in a tiny personal scream. He leaned over, closing the passenger door. The click of the door latch alerted the zombie mob to his presence. He hit the switch on his armrest. The door locks clicked in unison. The horde swarmed around his car; pounding, shaking, moaning. Eric looked around. He was trapped. Cars locked him into his space on the road. A horde of flesh eating zombies locked him in the car. He cried a few lonely tears. The car shook with more violence. His tears turned to sobs that then became screams as the first fists punched through the glass. He screamed until one of the zombies bit out his throat.