originally published by The Local Dish.

The hot summer weather started to break and it was almost cool early on a Friday morning as I cruised down an almost empty I-75 to a commercial farm in Detroit. The farm spreads across several lots that was once brimming with houses, torn down decades ago, now reclaimed by nature. Back near the hoop houses at the edge of the farm are about a dozen or so wooden boxes stacked on top of one another alive inside with bees. Rich, the beekeeper, meets me a few minutes after I arrive. Pulling his van up to the hives, he opens the back hatch to reveal about a half dozen wooden boxes filled with live bees, some of which are buzzing around inside the van.  He is checking on the queens he placed in the hives the week before. It’s late in the season to start a hive but he is hoping to strengthen them enough to last the winter. First, he checks on the established hives filled with combs. A wasp is trying to infiltrate a hive but the workers pounce in to action and tear it apart limb by limb.

Rich is calm around the bees and his demeanor is infectious. I, too, feel calm around the buzzing of the bees.  Rich checks the hives with the newly placed queens.  The bees swarm around nervously as he pulls the trays from the first boxes to be checked. “The queen isn’t out,” explains Rich. He shows me a small plastic container with a chamber that houses the queen behind a white sugary paste. The worker bees should have eaten their way through the paste to release the queen. The bees in the other boxes are noticeably calm….they have released the queen…so he doesn’t need to use the smoke to calm them.

I stood about six feet in front of the hives, what I thought was a safe distance, to get some pictures. It turns out, as Rich explains, that I am standing right in their flight path! He tells me to stand behind the hives, the closest I’ve ever been to a bee hive, but he’s right. It is much safer. Rich wears a netted hat protecting his face but other than that he wears no other protection. I have none at all. He explains that sudden movements and the carbon dioxide released from panicked breathing elicit a strong response in the bees. Rich has quite a rapport with them, even scolding a few that get stuck in the strap of his sandals. “Get out of there,” he says just as one might to a curious cat that is snooping in a grocery bag. He doesn’t seem to worry about being swarmed. “Some people say that bees can sense fear, but I think they can also sense love. They can tell what your intentions are and they know when you mean them no harm.” 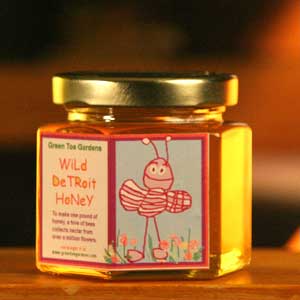 Rich began beekeeping about ten years ago out of necessity. He had an expensive mead-making habit and needed a more cost effective honey supply. Many of his friends in Midtown, Detroit had started community gardens around the same time and needed pollinators. So what started as two hives quickly grew into 80 to 100 hives across the Metro area. Rich now teaches classes and mentors rookie beekeepers. He can be found year round at the Royal Oak Farmers Market on the first and third Saturday selling honey, bee pollen, and bee bread, a mixture of honey and pollen. His honey is also the main ingredient in B. Nektar‘s mead, The D’s Bees ™.