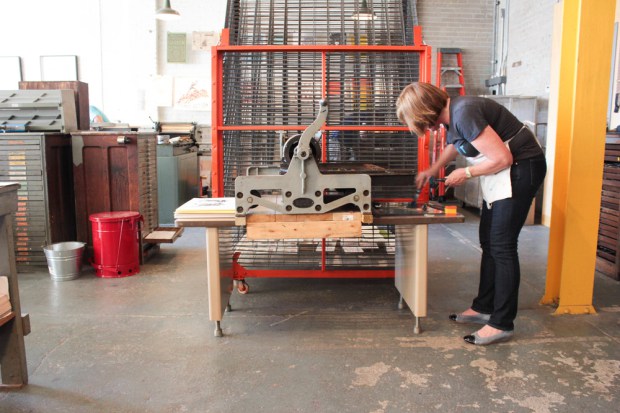 With most of what we read today appearing on computers, tablets, e-readers, and phone screens, many are tempted to declare that print culture is dead. Except for specialized practices, printing most often occurs on inexpensive home-office inkjet printers or commercial plotters that use digital files. So why do artists and designers take time to hand set print that could be read instead on a screen or mass-produced with disposable files?

Before the age of copiers, digital printers and commercial plotters, mass production printing relied primarily on letterpress and silk-screening techniques. Letterpress printing remained the primary way to duplicate books and newspapers until the twentieth century, when offset printing developed. Since the reproduction of text and images has leaped into the digital format of ones and zeros, print that doesn’t source from a computer file seems both antiquated and unique.

Many letterpress shops around the country operating today were founded when typesetting was still a common way to mass-produce text. Founded in Wilkinsburg, PA, in 1957, for example, the Tip Type letterpress print shop and artist project space takes pride in maintaining a “bunch of really old and beautiful stuff.” Others shops started up just as the digital age got going, including Zygote Press. Founded in Cleveland, OH, in 1996, Zygote’s vision focuses on sustaining printmaking as a “vital contemporary medium in the world of art.”

Recently Detroit’s three print shops—Signal-Return, Salt & Cedar, and Ocelot Print Shop—caught my attention. Less than two miles from one another, all three shops opened within the past few years, which begs the question—why now and why Detroit? As I found by visiting, each shop has a direct connection to the other two.

Signal-Return was the first to open in 2011. The shop’s artistic director Lynne Avadenka began her relationship with Signal-Return as a workshop instructor. After joining the board about a year ago, Avadenka’s role as artistic director placed her in charge of planning workshops, programming, special events, coordinating guests artists and creating partnerships with other cultural organizations.

At its inception, Signal-Return was the brainchild of Toby Barlow, Chief Creative Officer of Team Detroit. Inspired by a visit to Hatch Show Print in Nashville, TN, Barlow wanted Detroit to have something similar. Founded in 1875, Hatch Show Print has managed to stay not only relevant throughout changes in print media but also a thriving and favorite go-to place for commercial clients looking for something one-of-a-kind. Barlow took a year to find staff, equipment and space, ending up in Detroit’s historic Eastern Market, the largest historic public market district in the United States. Converting the space took about a year before Signal-Return officially opened but the area turned out to be ideal, particularly because it attracts so many different kinds of people from all over the Detroit metro area. “People come to the market for food necessity and this is like the art necessity,” Avadenka explained of the location choice— it is “sustenance of a different kind.”

The founding director of Signal-Return, Megan O’Connell, moved with her husband Leon from Maine to Detroit for the job. Ultimately, however, in 2012 O’Connell started her own print shop in Eastern Market just a few blocks away. Today the sole proprietor of Salt & Cedar letterpress studio, O’Connell worked with her friend, Dan McCarthy of Cost Plus Wines (also in Eastern Market), to broker the rent with Capitol Poultry who owned of a building just one block behind Cost Plus Wines. The space needed very little work and O’Connell has made only a few cosmetic changes since opening in 2012.

Ocelot Print Shop too has a connection to Signal-Return. Founding member Stacey Malasky worked for Lynne Avadenka, who taught her letterpress, lithography, etching, and bookbinding. Malasky also worked with Robert Beckman at Artists Image Resource (AIR), a community print shop attached to The Andy Warhol Museum in Pittsburgh, PA. Inspired by her experience at AIR, Malasky wanted to start a community print shop in Detroit, her home since moving from Maryland eleven years ago. Malasky discussed the idea with friend and fellow print maker, Kinga Osz-Kemp, who had heard of someone selling their family print shop equipment: drying racks, t-shirt press, tables, screens, squeegees. As it turned out, the seller, Bayard Kurth, shared Malaky’s and Osz-Kemp’s interest in starting a community print shop so the three brainstormed ideas and came up with a plan for Ocelot. Like O’Connell from Salt & Cedar, the founders of Ocelot found their space through word of mouth. The spaces they looked at ranged from totally refurbished and expensive to stripped down but affordable. Then a friend introduced them to Patrick Dorn, Executive Director of Cass Corridor Neighborhood Development Corporation (CCNDC), an organization that was then in the process of moving offices to a different part of the building, leaving a large space available. For the founders of Ocelot, the price was right and the location was central to where Malasky, Kurth and Osz-Kemp all lived.

Activating the community is an important aspect of each shop’s mission and each achieves it via a slightly different business model. While Signal-Return is a non-profit with an on-site retail shop and only some commercial job printing (made possible through a rotating artist-in-residence), Signal-Return and Salt & Cedar are more specifically commercial spaces. Salt & Cedar is a sole proprietorship and Ocelot is an LLC. “We wanted to do a community shop but we also wanted it to be a commercial screen printing shop so we had some revenue,” explains Malasky from Ocelot. All three shops, however, have created a space where people learn printing outside of academia, in a more hands-on and less cost-prohibitive way. Here, in these three spaces, printing is fine art.

From entrepreneurs using the spaces to help start small businesses, to artists and writers finding fresh outlets for their creative work, the community response has been positive. Writers who attend literary events at Signal-Return enjoy selecting and setting the type for their own work. O’Connell says Salt & Cedar has become a bit of a sanctuary for artists coming in and out of the city; at Salt & Cedar, they work, hang out, relax and talk about art.

Digital media has democratized art. Some might say that all one needs now to be an artist is a computer and a stream of ideas. Instead of first learning basic skills (painting the same still life composition as the rest of the class), theoretically artists can work backwards now—they can start with ideas and subsequently learn the techniques that bring their concepts to life. With online tutorials and YouTube videos, people can learn alone at their own pace, taking in what they need and skipping the rest. This has opened up the art world to voices that may have otherwise never been heard. But making art like this can be a lonely endeavor. Though social media has afforded us the ability to connect with people across the globe there is something to be said about creating art in a communal space. By its very nature and because of the high cost of equipment and the space needed to house it, printmaking is communal. Artists and makers, who might otherwise never meet, come together in one physical space to collaborate, exchange ideas and skills.

Though Ocelot, Salt & Cedar and Signal-Return make work primarily using hand-printed processes, each one still uses computers to design and create. “Although I love letterpress and starting with movable type is my preference, sometimes I start with something that is mostly pixels until it hits the press,” says O’Connell of Salt & Cedar. This process appeals to many artists that create primarily digital work. With digital art there is no original piece. It is something that only exists as a file, shared through social media to be viewed on screens and available to be printed infinitely with an inkjet printer on paper that often fades quickly. For artists who work digitally, printmaking exists somewhere between mass production and fine art. Through the printing process, the work changes incrementally. Each print is handcrafted with slight variations. This kind of uniqueness cannot be achieved with a print made from a digital file.

All three shops offer a regular schedule of workshops. Salt & Cedar’s “Book and Bread” evening event, for example, includes a light dinner prepared with Eastern Market ingredients and instruction for how to make a hand-sewn, soft-cover journal. Signal-Return currently offers a one-day holiday card workshop where participants can produce their own set of holiday cards. Ocelot Print Shop and Signal-Return are creating a joint workshop which will consist of a screen printing and letterpress class, ultimately creating one project that uses both techniques. These affordable workshops and classes offer artists in the surrounding community the ability to learn skilled techniques without the cost of a degree in fine art.

So again, I pose the question: why now and why Detroit? Although publications ranging from The New York Times to Buzzfeed love to declare that anyone starting a business or community project in Detroit is somehow “saving” the city or “putting Detroit on the map,” no one who actually lives and works in the city, including these shop owners, claim to be saving anything. The founders of these shops chose Detroit because it’s where they live. The city has always been a place where artists and makers have pooled their resources to create something larger than themselves. These shops continue this tradition by offering a space where artists can come together to collaborate and exchange ideas and skills. The work they create is based in part on an opportunity to interact with the many other small businesses and community groups in the neighborhood, many of which share their model of community space supplemented by a commercial form of income. Next door to Ocelot Print Shop, for example, Back Alley Bikes, is a community space that provides cycling education; it also has a retail shop that uses 100% of its profits to further fund its community programs. Eastern Market too is a community space that funds itself through a commercial source. Though the Eastern Market district was privatized in 2006, its mission remains the same—to create a public space that can fund itself. This community/commercial model has created a neighborhood fertile enough to support new cafes, restaurants and art galleries, all of whom seek and need original print materials. It is a model that continues to feed itself with new talent.