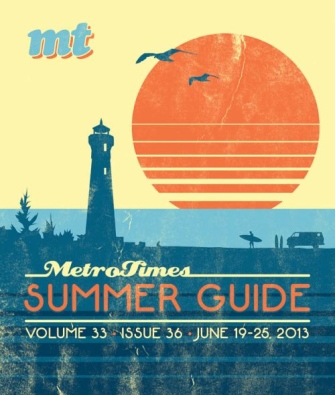 Surviving Summer in the City

A guide for those who hate the season.

For some of us, summer is our least favorite season; actually, we hate it. We hate the heat, the humidity so high it turns the air to soup. We hate all the people who come piling out of their houses to gather, drunkenly, at festivals, sporting events and outdoor concerts. They complain about how dirty the city is while breaking beer bottles on the ground, vomiting in the street and pissing in alleyways. Kids are out of school and overtake many activities that are an adult swim any other time of the year, like going to the movies. Yuk. Children. They are worse than the drunks.

So how do those of us who hate the summer survive yet another sweaty season in the city? Well, here are a few things to help ease the pain of sweat-soaked pants, sticking to your thighs.

First, it’s hot and uncomfortable and you don’t have air conditioning, so where do you go to cool off? Well, you also need to eat, so why not kill two birds with one stone: Head over to Bozek’s in Hamtramck. They don’t just have a butcher counter, they have a butcher room. It’s refrigerated. Hang out in there for a couple of hours, carefully considering each piece of meat and soak up as much refrigeration as you can.

The movies are another great way to enjoy some air-conditioning. Too bad the movies out this summer are all turds. All the chain theaters will be crawling with children anyway. Children running in the aisle, crying through important, quiet scenes, flagrantly disregarding theater rules by talking on their cell phones.

Skip the whole mess and go somewhere and see something that no child would be interested in:

THE REDFORD THEATRE has two great features playing this summer. First up, Alfred Hitchcock’s 1946 film, Notorious. This is a black and white film, which is like kryptonite to children. The film stars Cary Grant, Ingrid Bergman and Claude Rains. It’s a gripping thriller about three people whose lives become intimately entangled during an espionage operation. It’s playing at 8 p.m., July 26 and; 2 p.m. or 8 p.m., July 27.

The other great child kryptonite movie playing this summer at the Redford is The Long, Long Trailer, starring comedy duo Lucille Ball and Desi Arnaz. The two play newlyweds who spend the $5,345 they were saving for a house on a 36-foot mobile home. This thrifty plan turns out to be a real money pit as one hilarious disaster after another befalls the them while traveling across the country. See it at 8 p.m., August 9; or at 2 p.m. or 8 p.m., August 10.

If you prefer watching movies at home on the couch whilst in your underpants, then check out these movies currently on Netflix instant watch.

The Thing (1982): Take your mind off the sweltering heat outside and hang out with a young Kurt Russell and the gang at an Antarctic research station. If it weren’t for the terrifying, shape-shifting alien woken by a Norwegian research team that goes on a murderous rampage, it would be a much cooler location than your stuffy apartment.

Summer School (1987): The only thing that could ruin summer vacation when you were a kid was the threat of summer school. The kids in this ’80s joint have the help of a movie montage to get them through the drudgery of class. Directed by Carl Reiner and starring Mark Harmon and Kirstie Alley, this movie is the story of a rogue summer school teacher who plays by his own rules and gets results. He takes a group of slacker high school kids from mediocrity to average in a mere six weeks and, in the end, he gets the girl.

Need to get out after that mini movie marathon? Hop in the car and head to the Detroit Zoo for Zoomance, an after-hours, adults-only event featuring cash bars and live music. People can enjoy an adult beverage while strolling through the zoo. Being at the zoo when there are no children around is amazing! There is no longer a two-foot tall barrier of children standing between you and the enclosure wall. The lions, tigers and bears that spend most daytime trips to the zoo lounging around on rocks and napping are out and about, some even chasing squirrels and birds that are dumb enough to hang out in the enclosures. Be sure to check out the primates first. The chimpanzees make themselves a new bed out of old socks and packing material every night, it’s overwhelmingly cute. Since there is a cash bar, there will be people who overdo it and shout stupid shit at the animals, but it’s more entertaining than disruptive. Again, drunks are still better than children. You’ll have two chances to enjoy Zoomance this summer: 6-9 p.m., July 11 and August 22; tickets are $14.

After a night of drunkenly taunting animals at the zoo (I mean watching other people drunkenly taunt animals at the zoo), you’ll need to relax in some nice, cool water. You don’t want to go to a public pool, swarming with children and more urine than water. (And, frankly, the urine is one of the more sterile things in the pool.) While you don’t have enough gas money to make it out to a beach, you can scrounge up the $11.99 for an inflatable pool from Kmart. It’s probably only large enough for your butt — your l arms will hang over the edge — but that will make it easier to reach for your tasty snacks and frozen drink. It’s small enough to only take about 20 minutes to blow up and fill up.

Summer in the city is no day at the beach, but if you stay away from large rowdy crowds, anywhere children might be and find some creative ways to stay cool, you’ll make it through another sweaty season. Remember, it’s Michigan — winter is always just around the corner.